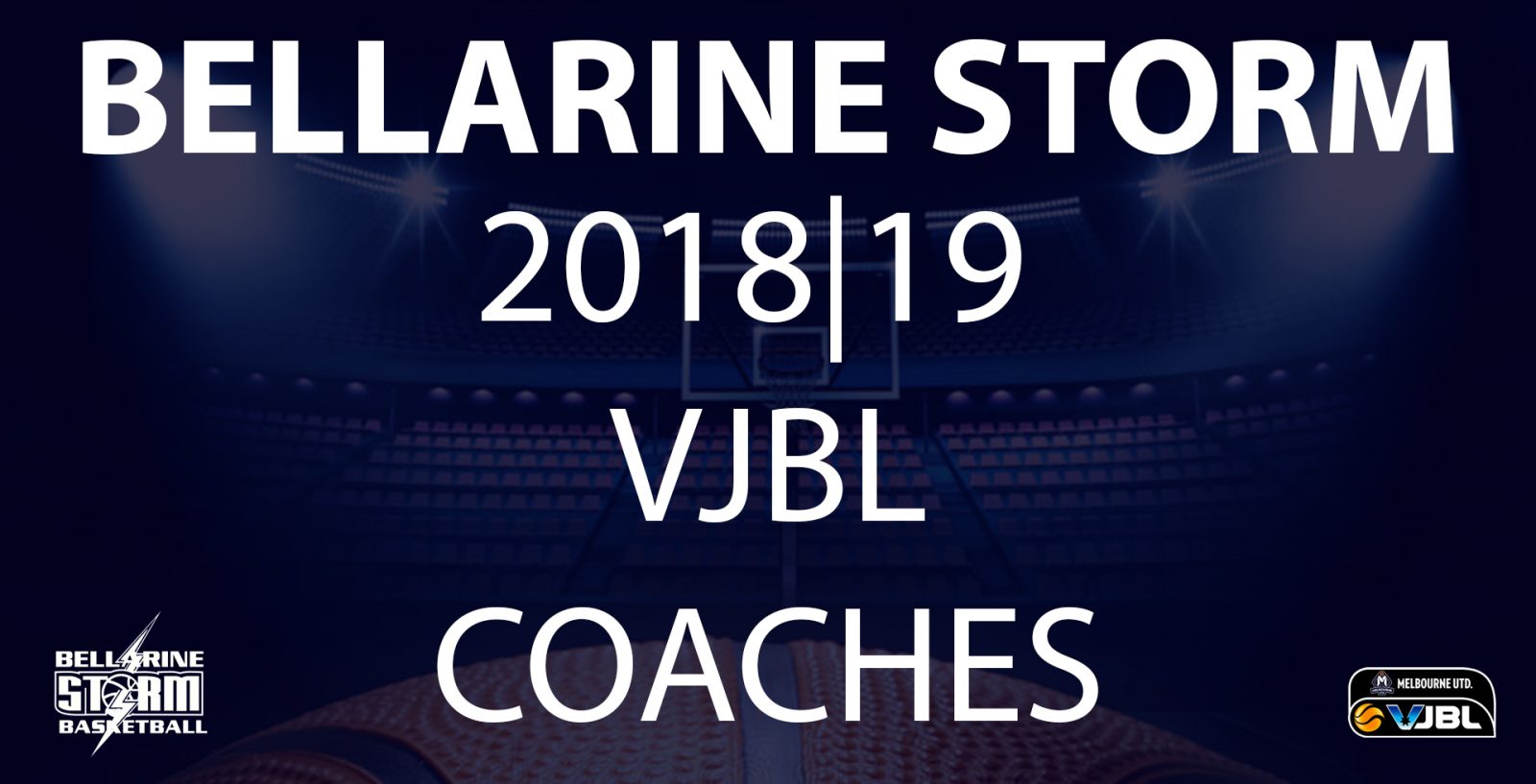 The Bellarine Storm are excited to announce our Victorian Junior Basketball League coaches for the 2018-2019 season. The coaches named will head up our first teams in their respected age groups.

Coaches for our other teams will be named after tryouts.

Congratulations to all of our appointed coaches.

Simon has done a fantastic job with the current U12 2 girls team earning him a step up to the first team this season. Simon also coaches a domestic U15 girls team showing his dedication to the association. Simon played at Bayside Blues during the early 90’s – mainly playing VBA Div 1 and Div 2.

Brendon Matthews is the Girls Coaching Director at Bellarine Storm basketball and the most winningest coach the program has ever had.  He is arguably the best junior coach in the Geelong region, having qualified teams to VC for ten seasons, attending the National Classic on six occasions and the under 14 nationals on one occasion.  In 2016 and 2017 Brendon led the under 18 Storm team to win back to back Victoria Country Championships.

Brendon has an impressive list of achievements for a coach who continues to work tirelessly in his 12th year in the Storm program.

Starting off at u14 girls level with Geelong, 2017 saw Andrew coach the 16.2 girls at Geelong, attended USA coaches conference in Phoenix and assistant coach with the Geelong Youth league women which has continued on through for 2018 season.

Jeff has a passion and love for the game of basketball, he played competitive basketball from around 16 years of age up to a few years ago.  Jeff coached for a number of domestic basketball seasons in the Eastern Suburbs of Melbourne for Mt Evelyn Meteors.  For a number of years he was team manager for my sons Kilsyth Cobras VJBL side, then transitioned into a coaching role for U14 and U16 boys teams for Kilsyth Cobras in the VJBL. Since moving to Geelong at the end of 2017 Jeff is currently assistant coach for the U16 girls under Peter Byrne (Senior Coach). He is continuing to learn and develop as a coach and try and bring about the best in players and how the players best contribute to the team.  Jeff also loves watching the NBA and follow the ‘SPURS’.

Tyrene played basketball as a junior, representing Darebin at VJBL level for 3 years.  Tyrene has been involved in basketball for 17 years at Bellarine, both as a coach, referee and Competition Manager.  She has been coaching VJBL basketball for 10 years, and is currently the head coach for the under 12 boys 2 team. In 2011, she led her under 16 girls team to a VJBL Region 1 championship.  Tyrene is heavily involved in coaching in Bellarine’s domestic competition currently coaching under 12 and under 17 girls’ teams. She also assists with coaching our domestic and representative training programs.

In the 2017  VJBL year, Troy had the opportunity to assist in the Bellarine storm under 14 boys team, learning the from veteran coach Ray Smith, the high level of standards required from both coaches and players in representative basketball.   The team went on finishing first on their ladder and storming through the finals series to become grand finals winner. This year, drawing from his learning experiences and the wealth of coaching knowledge from the association, mixing old with new philosophies, he has been building the fundamentals and developing physical abilities in a team that he hopes to see again next year.

David has been involved in basketball one way or another since the age of 5. At the age of 8 he made debut as a very young Bottom age Under 12 Bulleen Boomer coached by Cheryl Chambers and played right through Junior basketball at Bulleen and later Kilsyth at a representative level in Metro Div1. At the age of 15 took up coaching domestically and acquired my Level 1 accreditation, coaching at Kilsyth until his final year of Uni when full time work commitments took over. In 2015 David returned to coaching at Bellarine Storm as an assistant coach with the Under 16 girls 1 and after resitting his level 1 in 2016 stepped back into the driver’s seat for 2016/17 season as Head coach U16 Girls 2 making through to the prelim final. David has been asked a number of times why I coach over the last few years, to which his response is “Basketball has given me so much over the years, with almost 30 years under my belt playing or coaching the thing I enjoy most is seeing players grow and develop in the game that I enjoy so much”

Paul has been coaching Representative basketball for 6 seasons having made the transition from Corio Bay after 3 seasons. In his two seasons at Bellarine he has taken his team to consecutive finals at Victorian Country Championships finishing runner up in 2016.

Leigh Allan will be in his third year of coaching at Bellarine Storm, taking control of the Under 21 Boys for the second straight year.  Prior to moving to Storm, Leigh coached for two years at Corio Stingrays, firstly as an assistant coach for the under 16 boys and secondly as the head coach of the under 18 boys. Leigh has also been coaching domestic basketball for at least 15 years and Bellarine Peninsula Basketball and Corio basketball.  As well as his basketball coaching experience, Leigh has many years’ experience coaching junior and senior level cricket. We are excited to have Leigh join Bellarine in the capacity of Head Coach for our under 21 men’s team